We all love STM32F103C8T6 aka blue-pill since its a nice cheap board (1.81$ from Aliexpress) which have plenty of features especially USB2.0 full-speed and CAN support. Unfortunately there is a hardware problem with chinese board at USB port.

I was more interested into USB2.0 support and tried a simplest usb program based on libopencm3 but it did not work. I googled a bit and found following link. 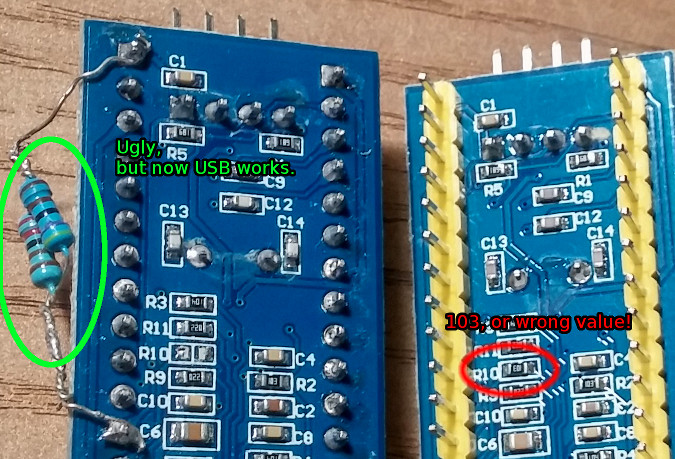 Hardware installation The USB standard require a 1.5k pullup resistor on D+, but this board is known to have a wrong value (R10 on the board). It ships with either a 10K resistor or a 4.7k resistor, but it should be replaced with a 1.5k resistor, or put an appropriate resistor value (e.g 1.8k) in between PA12 and 3.3V. It is also true that some PCs are tolerant of incorrect value so, before you change the resistance, you can try if it works in your case.

I did not want to replace the R10 with a 1.5k resistor and I was looking for some software hack to overcome this defect. The below code is a hack to trigger device enumeration at startup. Driving D+ pin to low explicitly removes the pullup effectively and subsequent usb_init() call will take over the pin and it will appear as proper pullup to the host.

The delay is arbitary and 5 ms delay works almost all the time.